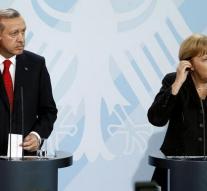 - The announcement of the Turkish President Recep Tayyip Erdogan that he withdraws all charges for defamation, does not apply to cases that are pending in Germany. Commissioned by his lawyer in that country, Ralf Höcker know. That German media reported Saturday.

Erdogan sued include the TV comedian Jan Böhmermann in Germany. Which had a satirical poem he read out on television in March the Turkish head of state mentioned include goat fucker.

The announcement that the charges be withdrawn only concerns Turkey says Hocker.,, In Germany there is still no change. ''