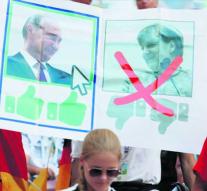 berlin - If the appearance is not deceiving, Merkels `Willkommenskultur 'ends today with the' open borders'. Minister Horst Seehofer (Home Affairs) wants to close the Bavarian border for refugees who have already applied for asylum in another EU country.

Nevertheless, Chancellor Angela Merkel will receive a respite from the upcoming EU Council, to design a difficult European solution for each other.

In Bavaria, Seehofers CSU today wants to pro forma decide to close the borders. That would mean long waiting times at the border with Austria, where agents with machine guns should pick asylum seekers out of waiting trucks and passenger cars. The free movement of persons and goods, regulated in the Schengen Convention, would, as Merkel fears, be under discussion.

The high-level conflict between the two politicians plunges the Federal Republic into a serious crisis, which has been shaking the Merkel government for a week. When CDU chairman Merkel (63) dismisses her rival Seehofer, boss of the Bavarian sister party CSU, because of his idiosyncratic behavior, their federal Berlin government almost certainly falls.

The 68-year-old Seehofer behaves as if he were the Viceroy of the Federal Republic. As the person who does what the majority of the Germans want, namely the return of refugees already registered in another EU country in the Eurodac database. This would re-apply the old 'Dublin rule', since the refugee crisis from 2015 onwards.

But also on the personal level the ruffs are directly opposite each other. Sunday newspaper `Die Welt am Sonntag 'cites Seehofer: ' With that woman I can no longer work,' the Bavarian minister said about the Chancellor. Actually enough reason to send him the avenue.

However, the Damocles sword hangs above Merkel's head. Seehofer's decline would maneuver Germany, and with it Europe, into an acute and severe political crisis. And that is not in the interests of Berlin, Munich or Brussels. But a weakened EU with a paralyzed Germany is what populist presidents dream of in Moscow, Washington or Ankara.

It is in any case difficult, time-consuming and expensive to close the German land borders of 3. 800 kilometers. Now there are sample checks at just three of ninety border crossings in Bavaria, such as near the motorway at Passau. Around 65,000 refugees came to Germany last year, who were already registered elsewhere. These persons should be returned. Only this year there were 78 000 asylum seekers.

Merkel fears a chaotic situation if other European states close the borders and that refugees are stuck in Greece, the Balkans or Italy. Tonight the new Italian Prime Minister Conte comes to Berlin, the French president Macron will follow a day later.

In the meantime, Seehofer hesitates in an interview: 'Nobody in the CSU has any interest in sending the chancellor away, or breaking up the list of links between CDU and CSU and the government. 'The German king's drama is being prosecuted.