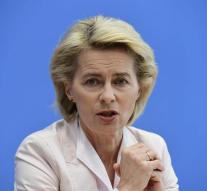 - The German government wants in extreme cases use the army for counter-terrorism in their own country. That is a sensitive issue in Germany, but Defense Minister Ursula von der Leyen sees it as a necessity.

'Rather than skepticism now in retrospect the accusation that we were not prepared, '' the minister said Monday in an interview with the newspaper Bild.

Von der Leyen wants to discuss the possibilities for deployment of the Bundeswehr with the interior ministers of the Länder. So far three of the sixteen federal states according to their expressed interest in the option.,, We will end this summer to decide which scenarios should be practiced. ''


A discussion about,, right and important, '' said the CDU minister. She hopes moreover that it will not be necessary to send the army to the street, but recent terrorism has opened everyone's eyes in her,, ''.