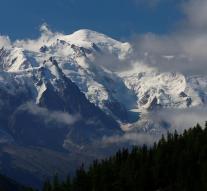 amsterdam - Two German alpinists were found dead in the Mont Blanc massif on Wednesday. The two mountaineers succumbed to undercooling during the climb of the Mont Blanc du Tacul.

The two forties started climbing on Monday morning, but ended up in a violent storm. Their bodies were brought down on Wednesday afternoon after the discovery.

A few days ago, the lifeless body of a 34-year-old South Korean was found in the Mont Blanc massif.