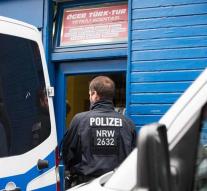 - German police raids Wednesday morning done by three suspected supporters of the terrorist group Islamic State. One of the suspects would have supported IS financially and logistically.

Duisburg police searched a travel agency with a Turkish name. The owner would have contact with two young people in Essen wanted to carry out an attack on a place of worship for Sikhs. The owner has it contradicted. The other incident took place in Dortmund and Hildesheim in Lower Saxony.

The police said that no arrests have been made. It is not known whether seized in the raids stuff.


Police reported Tuesday that a terror suspect was arrested in Mutterstadt (Rheinland-Pfalz). It is possible to have a prominent member of terror group Islamic State. A special police unit had arrested the 24-year-old Syrian.