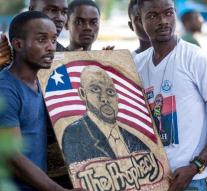 monrovia - George Weah is in charge of the preliminary results of the first round of presidential elections in Liberia. The 51-year-old former footballer, who included AC Milan and Paris Saint-Germain, received over 39 percent of the votes.

Soccer coach Arsène Wenger recently got into the mistake when wrong messages about Weah's profit reached him. 'I would like to congratulate a former player of me, who became Liberia's president,' said Wenger, far too premature.

The fact that Weah is heading now does not mean Wenger will be right. In the second round of the election, Weah is likely to take up Joseph Boakai, who has been Vice President under Ellen Johnson Sirleaf for the past twelve years.

Boakai received over 29 percent of the votes. So it will be exciting. Third, with less than 10 percent, the lawyer Charles Brumskine followed.