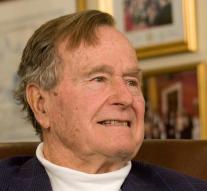 houston - oormalig US President George H. W. Bush (92) is for some unknown reason hospitalized in Houston. He is in stable condition. That says his chief of staff Jean Becker, reports BNO News. It is expected he will stay a few days.

More details are not known. Bush for many years leads to numerous health problems including Parkinson's disease. This ensures that the former president in a wheelchair. Recently, he was hospitalized because he suffered fractured vertebrae after a fall at his home in Maine.

Bush was from January 1989 to January 1993 President of the USA He also served two terms as vice president in the administration of Ronald Reagan from 1981 to 1989, and he is the father of former President George W. Bush, who was in office from 2001 to 2009.

Due to his poor health, Bush will be the only living ex-president who misses Friday's inauguration of President Donald Trump.