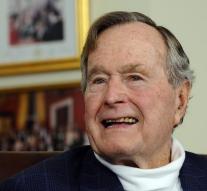 'But it's all right,' said Bush spokesman, who held the highest function in American politics between 1989 and 1993. The press also did not give details about Bush's situation except that he was admitted to the Houston Methodist Hospital and that an official statement quickly came to an end.

Bush Senior, the oldest living former US president, was in January, already treated in hospital for pneumonia. After two weeks, the 41st US president at the time was discharged from the hospital.