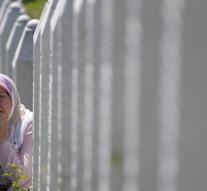 the hague - On the square in The Hague on Tuesday, the genocide was commemorated on Bosnian Muslims 22 years ago in Bosnian Serbian Srebrenica. The annual meeting drew hundreds of interested parties.

At the memorial under the motto Never Forgotten, several organizations were involved, including the Stari Most Political Committee, BiH Platform and PAXvoorVrede. The Square was a temporary monument throughout the day. People from Wassenaar also walked to the square in a so-called peace march for Srebrenica.