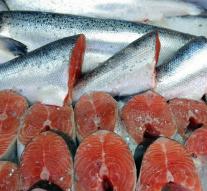 - The US food authorities have given permission for the placing on the market of genetically modified salmon. It is the first time that an animal which has been doctored, is approved for consumption in the US, according to US media Thursday.

According to the Food and Drug Administration, the modified salmon safe enough to be eaten, and is also not harmful to the environment. Consumer and environmental groups were strongly opposed to the genetically engineered salmon.