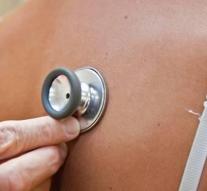 london - London physician Manish Shah has been charged with 118 sex offenses, so Scotland Yard made known Wednesday. This includes the abuse of a minor, according to British daily newspapers.

He would have abused a patient under the age of 13 years. The 47-year-old East London doctor is also charged with 65 cases of rape and 52 assaults. The investigation was started four years ago after victims went to the police. The people would be abused between June 2004 and July 2013.

The suspect must appear before the court on August 31st. In the meantime he has been released on bail.