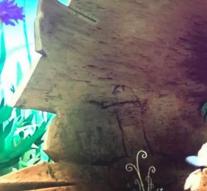 amsterdam - The penis that can be seen in Maya de Bij's children's series is 'probably a misguided joke'. Unfortunately, the jokes will never be discovered, and he will take his secret into the grave.

That says Hans Bourlon, the highest director of Studio 100. 'Not really professional, but maybe we will never know who has done this,' said the CEO against Het Laatste Nieuws.

The fuss about the drawing arose after an American woman had found the shape of the male genitals. 'This does not belong in a children's show, I find it disgusting,' said Chey Robinson on Facebook.

While some parents indicate never to put the series on, others find it hilarious. 'What child does it look right now? They look at the bee, not to the almost invisible penis. '

It's not the first time that cartoons come into contact. Disney is also sometimes accused of processing subliminal messages in its cartoons. Tom Sito, who made for Disney drawings, defended himself against The Huffington Post against all allegations. According to him, a suspected erection, for example, is a knee.

The relevant scene in Maya de Bij has been adapted.