Home / Tech / Gelderland wants to get rid of self-driving car 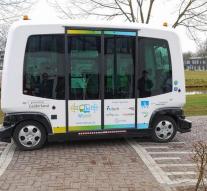 arnhem - Gelderland wants to get rid of the experiment with the self-driving car on public roads. The province has invested 4.1 million euros in the project. ' Market players must now take the baton '' says the province. The WEpods, such as the names of the cars have never carried passengers between station Ede-Wageningen and the campus of Wageningen University, as intended.

Almost two years ago Gelderland announced proudly that the first self-propelled car without a steering wheel and driver in 2015 would find their way across the Gelderland roads. ' A world first 'was. But the technique proved more complicated than expected. So pick up the vehicle is far from the promised 50 kilometers per hour. The WEpods have so far only some passengers transported on the Wageningen campus.

The province hopes that presents itself an acquisition target in December, even though this has no party image. ' There are still obstacles on the road, '' says the province Wednesday.