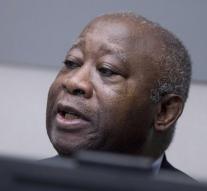 the hague - Judges of the International Criminal Court (ICC) in The Hague have rejected a request for provisional release of former Côte d'Ivoire president Laurent Gbagbo. Gbagbo, suspected of war crimes, remains in detention because there is 'danger of escape'.

Gbagbo's defense team had requested provisional release, but the judges stated that there were insufficient 'concrete and solid' conditions that would ensure Gbagbo's continued presence in the process.

Gbagbo is accused of crimes against humanity, including murders and rapes, in the West African country after the 2010 presidential elections. He had lost the elections but refused to make way for today's president Alassane Ouattara. During the conflict until April 2011, approximately 3,000 people were killed. Côte d'Ivoire delivered Gbagbo to the Criminal Court in 2011.

The 72-year-old Gbagbo is the first former head of state in charge of the ICC. An end to the process that began in January 2016 is not yet in sight.