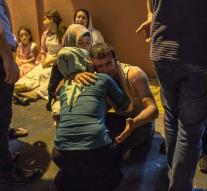 ankara - The death toll has risen through the bombing of a wedding party in the Turkish city of Gaziantep to at least 27. That the Turkish President Tayyip Recep Erdogan made it known in a statement. More than 90 people were injured.

The suspected suicide attack took place late Saturday night. According to Erdogan's Islamic State likely behind the attack. The responsibility has not yet been claimed.

The bomb went off in the Akdere district when a large group of Kurdish wedding party on the streets further fourth.


Turkey has to deal with a series of violent incidents. In July, claimed the failed coup by the army many civilian lives. In June, 44 people were killed by suicide bombers at the main airport of Istanbul. In October last year killed 95 people by two suicide attacks on pro-Kurdish activists in Ankara.