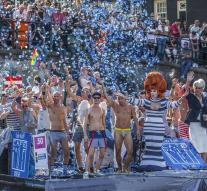 amsterdam - The Amsterdam Gay Pride is the premiere of the first rainbow emoji.

From twelve o'clock this afternoon, the emoji, consisting of three Amsterdam Andreas crosses in the colors of the rainbow are visible in messages on Twitter.

It is an initiative of the Amsterdam Maurice Beljaars, who a few months ago wondering why there is no rainbow flag emoji exists. Nbsp;

To get visible Pride emoji in a tweet to use one of the following hashtags: #EuroPride, #AmsterdamPride or #JoinOurFreedom.

The official rainbow flag as emoji to be still waiting. Which probably is only available at the end of the year.