Home / World / Gay marriage Australia for the time being 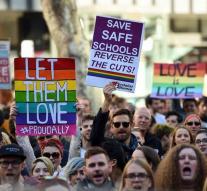 canberra - The plan by the Australian Prime Minister Malcolm Turnbull to hold a referendum on the introduction of same-sex marriage can not count on sufficient support. Introduction is therefore for the time being. Tuesday was opposition party Labor known not to support a referendum.

The coalition has in the Australian Senate no majority and therefore need the help of the opposition. Labor advocates of gay marriage but supports a referendum on the subject does not. The opposition party believes the recognition of gay marriage solely for the parliament.

By the rejection of the referendum will be the subject until after the next election again be discussed, Turnbull says. The elections are scheduled for late 2019.