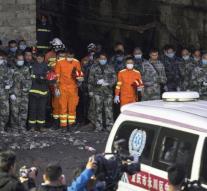 - The 33 miners were died trapped Monday after a gas explosion in a coal mine in China. In the coal mine in the southwestern Chinese city of Chongqing have shed employees Wednesday also the 15 missing workers found dead. Before that were already found 18 bodies.

Preliminary studies would show that this was a mine where the shafts were widened illegal. The miners would also not have the right equipment and tools have had with him.

The Chinese mines are considered to be the most dangerous mines in the world. Every year thousands of miners come to life. Poor safety features would be to blame.