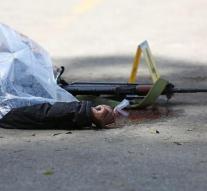 guatemala - At a hospital in Guatemala, six people died when a criminal gang opened the fire.

They tried to release a mediator. The member was transferred to the hospital by three prison guards. One of them came to life at the attack, two were injured. The other dead would be hospital visitors and patients. It is one of the largest hospitals in the country.

The perpetrators are members of the Mara Salvatrucha, one of the most violent gangs of Central America. Whether the gangster has finally been released is still unclear.