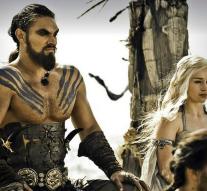 - TV series Game of Thrones was downloaded illegally most often in 2016. That Torrentfeak news reports based on data traffic on the BitTorrent network.

It is the fifth year in a row that the series is the most popular among illegal downloaders. The last episode of the latest season was divided after broadcast by some 350 000 people.

In second place is the zombie series The Walking Dead, while the new HBO science fiction series Westworld is in third place.

According to TorrentFreak, the number of downloaders has not grown compared to last year, but more and more people turn to download the HD versions of episodes than in previous years.