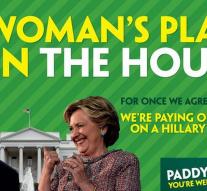 - With polls in favor of Hillary Clinton and Donald Trump scandal which will be processed after scandal, the Irish betting company Paddy Power has decided that it has fought the battle: Clinton will win the US election.

The company is so confident that the Hillary-gamblers already has paid well-deserved prize. In total, Paddy Power has paid out a million dollars. A spokesman tells us: 'Trump made a big leap when he was suddenly outsider presidential candidate. But the revelations have recently ensured that his march to the White House ended. '