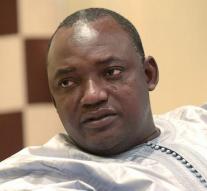 banjul - Gambian President Yahya Jammeh refused to make way for his successor Adama Barrow. He told Wednesday on Gambian television that he will not resign. He also condemns the interference of the West African economic grouping ECOWAS, which claims that Jammeh is going to get so far that he cedes power.

Jammeh lost the presidential election of opposition leader Barrow on 1 December. But the incumbent president the results not accepted. There would be the electoral fraud and are therefore military raided the office of the committee.

Secretary-General Ban Ki-moon of the United Nations made himself a week ago still angry about the deployment of soldiers by Jammeh and urged him to resign.

On January 18 Jammeh's term expires and Barrow would be inaugurated. He's been over 22 years in office, during which he led the Gambia with an iron fist.