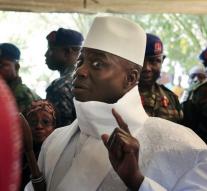 Friday Jammeh asked earlier what the deadline to advance the West African alliance Ecowas had set for his departure. ECOWAS troops are already in the Gambia to act against Jammeh and his faithful.

Jammeh lost the presidential election last month but refused to leave. Barrow is Thursday sworn in as president in the Gambian embassy in neighboring Senegal.