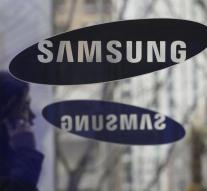 seoul - The Samsung Galaxy S8 gets a borderless screen with no home button. So say sources within the South Korean tech giant told Bloomberg.

The screen of the new unit covers the whole front. The home button has been replaced by a virtual variant, hidden in the glass. Furthermore, the telephones would be equipped with a curved screen.

The S8 must forget the debacle with the exploding Galaxy Note 7 devices. Samsung aims according to sources on a release date in March, with possible postponement until April. The tech giant will first thoroughly test the device before it reaches the market to issues such as preventing the Note 7.