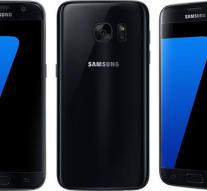 seoul - Samsung Galaxy S7 and S7 Edge users can expect an update in January. The announced South Korean tech giant that next month will roll out Android 7.1.1.

For people with S7 and S7 Edge Samsung began in November a public beta of which the fourth version released last week. Apparently, the number of bugs to a minimum reduced since Samsung has now decided to update the direction of the general public.