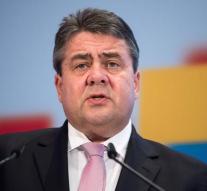 berlin - Siegmar Gabriel is probably the new party leader and candidate of the socialist SPD chancellor in elections in Germany next year. His main rival Martin Schulz, the president of the EU parliament, which has the battle already given.

The German newspaper Der Spiegel reported Friday that Schulz stated ' opposite party members to take into account not '' to be a candidate for the SPD. Gabriel thus remains by far the most important candidate about. He's in the Cabinet of Chancellor Merkel and the second man in the SPD one who has the first claim to the party leadership.

Gabriel did in 2012 an attempt to become party leader, but then lost to Peer Steinbrück in the elections the following year, then went under against Merkel. The SPD decide next month who the candidate will be chancellor.