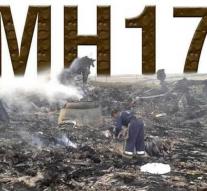 ottawa - The Foreign Ministers of the G7 countries have called on Russia to provide clarification on the crash of the MH17 passenger plane. The Boeing was brought down from Schiphol to Malaysia in July 2014 by an anti-aircraft missile in eastern Ukraine. All 298 occupants died. Among them were 196 Dutch.

Evidence from international investigators that the Malaysian Airlines plane was knocked down with a Russian army box missile is 'convincing, significant and deeply troubling'. Moscow calls the research unbelievable and blames Ukraine.

According to the G7, Russia must immediately consult with the Netherlands and Australia and clarify possible violations of international law, according to the ministers in a joint statement. The Netherlands is leading the investigation into the accident because the majority of the victims of the disaster were Dutch. 38 victims were Australians.

At the end of May, NATO Secretary General Jens Stoltenberg called on Russia to take responsibility for the crash. Tuesday is the four years since the device was shot down.