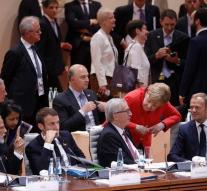 hamburg - The leaders of the G20 will work more closely to combat terrorist propaganda and calls for hatred and violence on the Internet. They have agreed to exert pressure on internet and social media companies to ensure that 'incorrect' messages (automatically) are cleared. 'We will make clear that we expect rapid removal,' said Chancellor Angela Merkel on Friday in Hamburg.

Also, the messaging services that terrorists can communicate via encryption are 'a major problem,' Merkel said after the first working day at the summit. These services need to be monitored more closely, but they pointed out that this can only be done if there are suspicious activities.

The rich countries, including the United States, China, the EU block and Russia, will also work more closely to dry out the financial resources of terrorists. 'This requires, among other things, the exchange of information' significantly increased ', Merkel said.