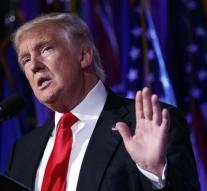 - Donald Trump is used to have in the Argentine press accused his phone call with President Macri to discuss a business project in Buenos Aires. Macri denied the story.

According to the Argentine journalist Jorge Lanata Trump in early talks to sell a tower that he wants to build in the capital. The project is for a while still.

A spokesman of Macri denied that the two had in their conversation about business. 'They talked only about the relationship between the two countries and their personal relationship. On the tower's never said anything. '

The team around Trump denies the charge across US media.