Home / World / Fuss about garden in IS theme for Halloween 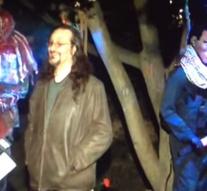 - An American man decided this Halloween his house and garden set up a little more exciting than last year. And so passersby saw last week the garden of William D' Catt in New Jersey depend filled with bloodied prisoners and dark IS- combatants with machetes.

Especially the doll with a mask of Obama and a gun in his hand, caused a lot of commotion. Neighbors of the man have stated to CBS New York that they always find fun Halloween decorations, but not of this neighbor. They prefer to see what child -friendly decorations in the gardens. "It was not meant to offend anyone", says D' Catt. A neighbor thought his garden was supposed to be an anti-American demonstration . D' Catt : "These decorations are anti -IS . I did not in any way attack America". The man has since been removed from his garden decorations , but do they know how to turn back during Halloween.