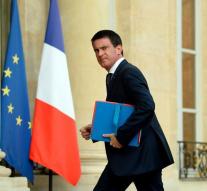 - France should consider a temporary ban on foreign money flows into French mosques. So says the French Prime Minister Manuel Valls in an interview with Le Monde. Valls reacts to the church murder in the village of Saint-Etienne-du-Rouvray where an elderly priest's throat was cut by two IS-inspired 19-year-old French.

Furthermore, it was a mistake Valls was walking around one of the terrorists with an ankle strap. Kermiche terrorist Adel, who was shot dead after the murder in the city of Rouen by agents, was awaiting a terror trial around the ankle. On the morning of the murder, he was, however, quite a few hours to go where he wanted. In those hours he hit far with an accomplice. 'This is a defeat for justice, which you must admit,' said Valls. He emphasized that judges are not responsible in his eyes for the terrorist act.

In addition, imams in the eyes of Valls should henceforth no longer be trained outside France. 'The relationship with Islam must be rebuilt from the ground. '


French security forces under heavy fire after the attacks of recent months.