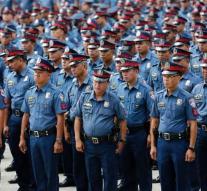 manila - The police chief of the Philippine capital, Manila, has ordered to send a complete police force back to the school desks. The 1200 agents from Caloocan will be released in the meantime.

The police in the area of ​​Manila hit a series of incidents, including the death of two teenagers. Filipino media revealed this week that police officers would have stolen money from the home of an elderly woman. That would be seen on camera images. That accusation led to much fuss.

Meanwhile, the police headline seems to be full. Police Attorney Oscar Albayalde said all staff in Caloocan should be trained to prevent further incidents. They are then transferred to other units. In the meantime, other units will be deployed to wake over the area.