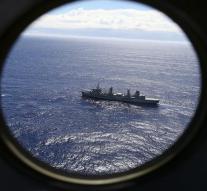 fremantle - The Dutch ship Fugro Equator has started the last search for the missing gear flight MH370 Malaysia Airlines. The vessel left the port of Fremantle in Australia and will be probably early task completion next year.

Fugro Equator is anyway the last ship to search for the Boeing 777 which en route from Beijing to Kuala Lumpur in March 2014 over the Indian Ocean disappeared with 239 people on board. The Chinese vessel Dong Hai Jiu recently completed his latest quest, reports the BBC. When the Fugro returns have ships from several countries scoured an area of ​​120 000 square kilometers.

What remains of the aircraft wreckage are some of East Africa and Madagascar have washed up in recent months on the coast. Relatives of victims the island of Madagascar recently visited to look for it leads. To our knowledge it was in vain.