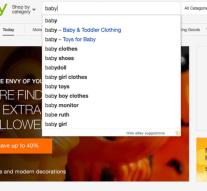 - A 28-year-old man has confessed to his baby Mary offered for sale on auction site eBay for 5000 euros. The father said that he had done for fun, police said Monday.

The approximately six-week-old girl from a refugee family. The advertisement was last week, according to eBay for half an hour online. The Internet company was rejected by dozens of users on the remarkable range, after which the company removed the ad and alerted the authorities.

From Internet data show, according to the police that the advertisement was sent via the Internet from the 28-year-old father and 20-year-old mother from Duisburg. After the placement of the ad on the Internet is the baby for youth under the protection of the office posted.