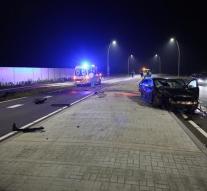 oudenbosch - A 74-year-old man from St. Willebrord was injured in an accident in Brabant Oudenbosch on Sunday evening, probably due to being in flight for the police.

Surveillance agents gave the man around 21. 15 pm a stop sign because he drove on highway A17 at high speed and winding. The driver then drove so hard that the police car could not follow him. The agents decided to follow his brake lights and saw him taking the exit Oudenbosch.

At the roundabout on the Vaarweg in the place, the fired motorist appeared to be bumped into another car, the driver also injured. The man from St. Willebrord was heavily injured next to his car. Both motorists were transported to the hospital. According to the police, it is not clear why the driver drove off.