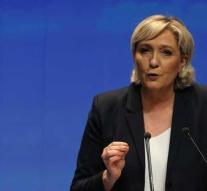 lyon - The Front National (FN) of the French politician Marine Le Pen is now officially named Rassemblement National, National Cooperation, after a vote among the members. Le Pen said on Friday in Lyon that 80 percent of the members who voted for the new name.

Le Pen, daughter of the right-wing radical founder of the front Jean-Marie Le Pen, wants to make a new start with the new name. Her father finds the name change 'a shameful loss of identity' of the FN, which he founded in 1972.

The old Le Pen liked to surround himself with extremely right and conservative figures and his supporters were often limited to those circles. Since his daughter 'inherited' the front in 2011, she tries to make it a people's party. She is called populist with her very right views on identity, immigration and security and very leftist views on economic issues.

She won just over 21 percent of the votes in the first round of the 2017 presidential election with only a few percent fewer votes than the winner, the current president Emmanuel Macron (24 percent). Macron won well in the second round.