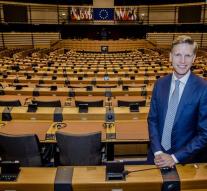 strasbourg - The European Parliament in Strasbourg is holding short speeches in minority languages ​​on Monday evening, but the interpreters are not allowed to translate. The rules only provide translation of the 24 official EU languages ​​and parliamentary chairman Tajani does not want to deviate from that, he writes in a letter to the initiators.

'Sorry,' Annie Schreijer-Pierik (CDA) told her spokesman. She would speak in the Twents for a minute, but look forward to it. The politicians wanted to plead for simplification of subsidies for regional language projects.

Jan Huitema (VVD) holds a speech in the Friesian language. 'Now I'll do it, but no translation,' he says to Frisian media. Makkinga's liberal suspects that Spanish-Catalan tensions play a part. Catalonia is based on independence.

The initiative addresses the European Convention on Regional and Minority Languages, adopted 25 years ago. Tajani writes 'linguistic diversity' to support.