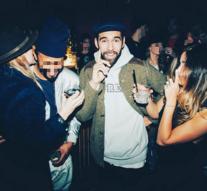 amsterdam - Update 10:45 pm- Victim Djordy Latumahina, who was killed in a shooting Saturday afternoon in a car park in Overtoomseveld, was known in the Amsterdam nightlife. But a criminal resume, he seems to have at first sight.

Website Butterfly Crime knows for sure, Djordy Latumahina is the man (31) before the eyes of his wife and daughter like a dog was shot. Various sources confirm, and friends react done on social media on the brute force with which to Latumahina was killed. His wife was severely injured, a young toddler (2), which was also in the car survived the tragedy.

An acquaintance of Latumahina did not expect this. ' He was a super nice guy. Someone always had beautiful women around him. He was also very open to social media. No type of criminal. Nothing but nothing has ever given me the signal of 'ho wait a minute. ' 'Latumahina comes from Barneveld and used high-level active in the local amateur club in SDVB. He started with a bunch of friends an event company, which later moved to Amsterdam.

Djordy organized not only campaigns for Nike and a tequila brand. He was also involved in the temporary store from Kanye West opened in Amsterdam in August, according to insiders. ' You never know but in my opinion this is a 100% mistake, 'says another. Besides the promotional work, the man regularly behind the decks in all the trendiest nightlife of Amsterdam.

The shooting on Saturday morning was at café Ulfet 2. This seedy bar just steps away from the jewelry store where owner Fred Hund was shot exactly six years ago in a robbery. Resignation reigns among residents near the cafe. The 44-year-old man who was hit was resuscitated on the sidewalk outside the bar but died in hospital from his injuries. It is a Turkish Haarlem, which is also not known felony.

Two others suffered slight injuries 'and will it survive,' police said. The owner of the bar was intercepted by local broadcaster AT5 says nothing to know and tore away on his scooter. Or his case is closed by the municipality is not yet known, but it is customary after such serious disturbances of public order. Police are looking for four men who might have something to do with the shooting. No suspects have been arrested yet.\n  \n  \n   advertisement

Of the shooting that took place Saturday afternoon in the garage are far fewer witnesses. 'I do not pop or whatever heard later when the car exploded. Underground remains all sound muffled, of course, 'said a neighbor who rushed cops saw unbuckle their heavy body armor. Another neighbor who came riding just saw the long black plume of smoke from the burning getaway car, and marveled at the many helicopters above his quiet neighborhood. The helicopters must have come too late for the two fleeing suspects who were seen by local residents. ' They also threw something into the ditch, '' said a boy who was playing near the parking lot.

If there are witnesses of the brutal shooting on the-1 floor of the garage under the luxury apartment rental and sale is not clear. The fact is that a man has been liquidated while he was in the car, a woman was seriously injured here. A young child was unharmed.