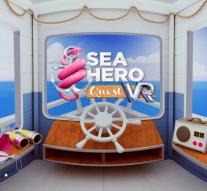 - Worldwide, about 47 million people suffer from dementia and aging only increases this. More research on the different forms of dementia is therefore needed. Deutsche Telekom therefore introduces the virtual reality game Sea Hero Quest VR, which allows anyone to assist in large-scale research.

One of the first signs of dementia is that patients find it difficult to find their way, even in known places. Sea Hero Quest VR therefore tests the player's orientation and navigational ability. This game provides researchers with a wealth of data for early recognition of dementia. The project has been set up with University College London, University of East Anglia and Alzheimer's Research

'Virtual reality gives us an even more intuitive method of determining orientation problems,' says Michael Hornberger, Professor of Applied Dementia Research at the University of East Anglia. 'With Sea Hero Quest VR we can measure when people do not know exactly where they are, for example, when they stop and look around.'

The game builds on the success of the mobile game Sea Hero Quest, launched last year. Over 3 million people played Sea Hero Quest mobile, making it the biggest research on dementia ever. A two-minute play session is equivalent to five hours of laboratory research.

Sea Hero Quest VR is now available for download for Samsung Gear VR. Do you not have VR glasses, but do you want to help with dementia research? Sea Hero Quest is still free for Android and iOS.