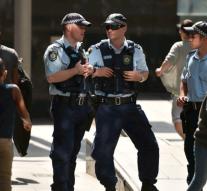 sydney - A 29-year-old Frenchman has a backpackers hotel in Australia stabbed a British woman while he 'Allahu Akbar' shouted. He also wounded two others at the hotel in northern Queensland, police said Wednesday. The perpetrator was arrested.

A 30-year-old British man was in critical condition taken to a hospital after the attack in the city of Townsville. According to the police the attacker was in Australia on a valid tourist visa and had no known ties to radical groups such as Islamic State. But the police does not exclude any motif.