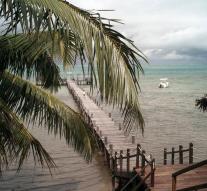 - Two French members of a nature organization have been killed in Madagascar, said the French Foreign Ministry. The husband and wife were volunteers Cetamada, an organization for the protection of marine mammals.

they were slain according to the Department,, during a heinous crime 'on the small island of Sainte Marie, on the east coast of Madagascar.

Radio France International reported that the bodies of 25-year-old man and 23-year-old woman were found Sunday near a nightclub.


The French police to assist in the murder investigation.