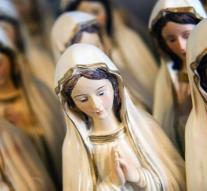 - The French village of Publier have the right image of the Virgin Mary Hide overlooking Lake Geneva. The religious image on public land violates the strict separation of church and state, the BBC reports.

The mayor has been given three months time to the statue, which stood since 2011, to take away. If it still stands, the town gets fined 100 euros per day.

Mayor Gaston Lacroix hopes to rid the image on a private property. Locally, there was much discussion about the religious work that was financed with public money.