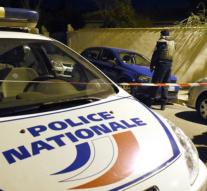 - The five men who last weekend were arrested in France were controlled by Islamic State from Iraq and Syria. That said, the French public prosecutor Friday.

The men, four French and one Moroccan, were in contact with the terror movement via coded messages. In addition, in house searches revealed documents showing that the men had sworn allegiance to IS.

The quintet Friday was brought to the court in Paris. The chief prosecutor said that weapons were found next to the documents and instructions on how the men were able to obtain weapons, the French newspaper Le Figaro. They were, according to Justice plan to commit on 1 December attacks in and around Paris. Targets included the headquarters of the Stasi, the headquarters of the criminal police and a courthouse on the Champs-Elysees. The terror suspects who were arrested Sunday in Marseille and Strasbourg, also Disneyland in mind.

Since its beginning in 2015 in attacks by Islamist extremists in France more than 230 people died.