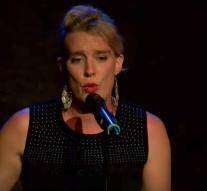 gourdon - A 35-year-old French singer, Barbara Weldens, died in South France during a performance. In the meantime, there was a wednesday evening in a church building in the town of Gourdon in the context of the music festival Léo Ferré. She suddenly collapsed. According to the French news site Europe1, she would have been electrocuted.

The police are still investigating her death. Fortunately, gold was an upcoming talent. She released her first album in February.