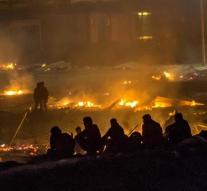 paris - After the riots in a refugee camp in the French Grande-Synthe, the complex on the night of Monday to Tuesday largely burned. Ten people were injured in the clashes.

The riots would be started on Monday afternoon, after a conflict between Kurds and Afghans, in which a blade was pulled. In the evening it was still unsettled, after a fire broke out, according to French media.

The residents of the camp, estimated between one thousand and fifteen hundred people were taken to safety. The camp of wooden huts set up by the aid organization Doctors Without Borders to provide shelter for the migrants formerly living under miserable conditions. Previously they lived in tents.