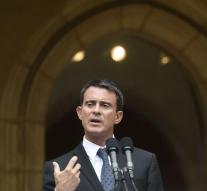 - "French Prime Minister Manuel Valls on Sunday warned that the threat of terrorism at present " up '' and that there are thwarted daily attacks. " In the past week, there certainly prevented two attacks and in recent days and even the hours that we are talking prevent attacks, '' said the premier Sunday against French media."

"Saturday is a prime suspect in a group of women who would like to carry out an attack in Paris, charged that Justice describes as: participation in a criminal terrorist project and an attempted murder committed in a criminal gang. It's about the 29-year-old Ornella G. which on Tuesday was arrested in the south of the country. Her fingerprints were found on a car that was parked in the center of Paris with gas cylinders on the same day. Three other women sitting since Thursday fixed in this case."