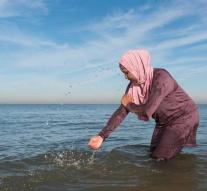 - France needs a modern, secular Islam. The idea of ​​a BURQINI clashes with that idea. Writing French Prime Minister Manuel Valls on his Facebook page.

The Council of State set Friday to attend a line through the boerkiniverbod in the town of Villeneuve-Loubet. According to the judges violates the ban on religious bathing suit against civil liberties. It is a provisional decision that the Council of State in a position to take the time to come to a more thorough assessment. Also, the prohibition only to this community, where a complaint was lodged by the French League for Human Rights.


The preliminary decision of the State Council does not end the debate on the covering swimwear, Valls claims. He referred to previous discussions about headscarves, religious signs and the burqa.

Also, Christian Estrosi, Deputy Mayor of Nice and President of the region Provence-Alpes-Côte d'Azur responded to social media. He calls on Twitter for a law that prohibits the BURQINI.

Mayors from various French towns left has managed to hold on to the boerkiniverbod. The police in Nice will continue to hand out fines to Muslim women who do not obey the ban, says the mayor of the resort. Also in Frejus are Muslim women who wear a regular swimsuit still fined.