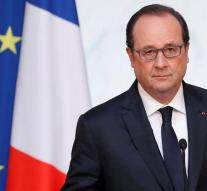 - Europe must make a new start and France will be up to the new European project. That said, French President Francois Hollande on Friday in a speech. He responded to the outcome of the British referendum on EU membership. Nearly 52 percent voted in favor of leaving the EU.

Hollande stressed that France continues to work with the friendly nation. He said that it can not continue to Europe as it is now. He speaks here of the European Minister Donald Tusk and the German and Italian prime ministers, Angela Merkel and Matteo Renzi, on Monday in Berlin.

Tuesday and Wednesday, the first European summit since the referendum. Merkel stressed Friday that her country has a special responsibility for the success of European integration. The EU is in her strong enough to find the right answers.


Numerous leaders in Europe spoke Friday in their comments on EU reform. Prime Minister Rutte called the outcome of the referendum also an incentive to reform the EU. His Greek colleague Alexis Tsipras called for a more social Europe. Renzi spoke of,, a more humane and fairer Europe that our house and our future. '