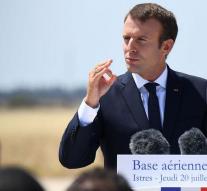 paris - French President Emmanuel Macron talks to Paris with leaders from chaotic Libya on Tuesday in an effort to bring peace to peace. Paris has confirmed reports in French media weekend that Macron brings together the Libyan General Khalifa Haftar and the Prime Minister of the Internationally Authorized Government Fayez al-Sarraj in a Paris suburb.

Since the collapse of military dictator Muammar al-Kaddafi (1942-2011), Libya has been torn by tribes, jihadist fighting groups and militias of local warlords, of which Haftar is one of the most important. He calls his fighters the national army and manages large parts of the northeast, especially on the coast.

Premier al-Sarraj has been leading the so-called government of the national agreement (GNA) since the end of 2015. This team has control in the west of the country, especially in the coastal region east of the capital Tripoli to the city of Sirte.