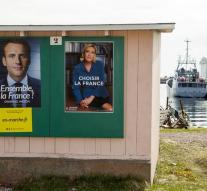 paris - A day earlier than in France, the polling stations have already opened in several overseas territories for the parliamentary election. On the island group Saint-Pierre and Miquelon, voters could already have Dutch time on Saturday afternoon. This was also true for the inhabitants of French Guiana and the Caribbean islands that belong to France.

The majority of the population cast their vote in one of the 577 constituencies on Sunday. In total, over 47 million French people can make use of their democratic law. According to the polls, La République and Marche, the party of President Emmanuel Macron, is favorite in the first round with about 30 percent of the votes.

By the district system, the government Macron, according to the research agency, eventually reaches 400 seats in the Assembly Nationale. The absolute majority gives Macron an unprecedented mandate for the execution of its plans. 'Golf or tsunami?', The left-liberal newspaper 'Libération' sank on Saturday.